Microsoft recently unveiled its plans for the next version of the Windows operating system. We give it a test drive

Windows 10’s days are numbered. A big event at the end of June revealed its replacement is on the way, with Windows 11 launching by the end of 2021. The reveal showed a significant update to Windows’ look-and-feel, changing the Start menu and taskbar, and applying a new design language to the entire operating system.

Under the hood there are bigger changes still, with Microsoft going all-in on its virtualisation-backed hardware security tools. This requires eighth-generation or later x86 processors and a Trusted Platform Module (TPM). It’s part of a rethinking of how IT professionals need to consider security in a world of endemic malware, where crime syndicates operate with impunity. Using virtualisation to lock down and isolate untrusted files is perhaps the least an IT department can do, but it is something that works.

Microsoft has been rolling out hardware-backed security for Windows 10 in its latest Surface hardware, and with Windows 11 will be bringing it to all supported hardware. This includes requiring trusted boot to reduce the risk of kernel malware, Windows Defender Application guard to open downloaded files in sandboxed virtual machines and user logins managed by encrypted tokens stored in a TPM.

This is, at heart, the secure Windows users have been asking for. The question for Microsoft is: will those users be prepared to use the hardware that supports secure Windows? It is going to be an interesting few months as users, admins and developers work out what these new hardware requirements mean for their device fleets.

Earlier in July, Microsoft rolled out the first preview build of Windows 11 to Windows Insiders on the Dev channel, updating test machines to the new operating system. The first public build does not have all the features currently planned for the release, but it is stable and ready for testing.

Installation on our test systems was easy enough, using the familiar Windows Insider version of Windows’ own update tools. There is no need to download ISOs or reload a PC from scratch: the build downloads in a few minutes and installs relatively quickly, leaving apps and data where they were.

After the first reboot, the user is presented with a subtly updated login screen, with a new font and a slightly changed layout. Settings for biometric sign-in on Windows 10 are preserved, so Hello camera and fingerprint sensors will continue to work on Windows 11.

Microsoft has made a number of tweaks to the Windows 10 graphical user interface. Where Windows’ task bar has always been left justified, it is now centred, with a new-look set of icons and a redesigned Windows logo. 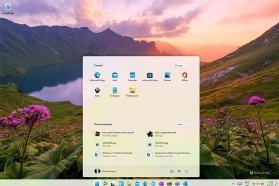 The Start menu is perhaps the most obvious change. Opening in the centre of the screen, it drops the Live Tiles of Windows 10 in favour of a separate new Widget pane. A split view shows pinned apps, along with a Recommended view that exposes recent documents and newly installed apps.

Even the windows are subtly different, now with curved corners (that match those on the screen of the Surface Laptop Go). This new look and feel, codenamed Sun Valley, takes Windows’ Fluent design language and applies it across the entire operating system. It’s a fresh lick of paint on a familiar house, where everything works the way it always used to, only now with some new tricks.

One of those new tricks comes when right clicking or rolling over the maximise button in any window. This opens the Snap Layouts tool, which uses the user’s screen geometry to suggest a new layout for applications. It is a surprisingly useful tool, which lets people quickly pick and choose windows to construct a layout for their workflow. Those layouts are stored as Snap Groups that can be quickly brought back as and when there is a need to open an app to deal with a task.

The new Snap tools build on an older Windows feature, rethinking it for how people work now. They can be used in conjunction with another older feature that gets to come to the fore – Windows’ support for virtual desktops. These now get a taskbar icon, simplifying switching between different layouts. It’s now possible in Windows 11 to have one for work and one for play, enforcing a barrier between work and life, which is increasingly important in these days of working from home. 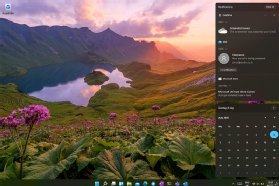 One big change is to Windows 10’s combined Action and Notification Center. These have been separated in Windows 11, with a new look set of notifications that have a much less cluttered look and feel, using the same rounded elements as the rest of the Windows 11 user interface. The Action Center, with its quick controls for system features is now a standalone panel, again using a rounded pop-up. Now, however, it is triggered by clicking around the network and sound controls in the task bar.

Once launched, it has a similar layout to the expanded Action Center in Windows 10, though the new-look icons provide more detail, showing connected WiFi networks and Bluetooth devices, as well as offering both brightness and volume controls. Microsoft lets Windows 11 users add and remove features as needed. For instance, a desktop can have fewer options selected than a cellular-equipped Surface Pro X.

Much of Windows 11 is more of the same process: refining and redesigning the familiar, making it more consistent and coherent. The new desktop look and feel is part of this, with a redesigned Explorer and an improved Settings app.

Perhaps the biggest makeover is to the Windows Store. Microsoft has thrown away its limitations, and now anyone can offer any app through the store. It does not have to be packaged as appx or MSIX. App developers can use the old familiar MSI or any EXE-based installer.

There is even support for Java packages and web-based apps in Electron or bundled as PWAs. Perhaps most important is that software developers can even bring their own payment engine, which enables them to keep all their revenue without giving Microsoft  a 15% commission. This is the reason why big subscription applications like Adobe’s Creative Cloud and Acrobat DC are already in the revamped store. It’s likely many more applications will be available in the Windows Store before launch.

The main feature missing in this first preview is support for Android applications in the Windows Store. Building on Amazon’s App Store and Intel’s tools for running ARM code on x64 hardware, it will allow Windows users to install and run familiar Android apps on a PC. While this means it will not be able to support applications that use Google’s Play APIs, any application recompiled for Amazon’s popular Fire tablets will run on Windows 11.

Still, that gives us something to look forward to for future builds. This first preview is intended for developers, but feels a lot more stable than early builds of Windows 10 did. This is perhaps not surprising, as Microsoft is building on its Windows-as-a-service model, which it has used for the past few years. In fact, much of Windows 11 has been running in the Dev channel for some time now, masquerading as a preview build of an upcoming Windows 10 update. The Windows 11 release represents the marriage of the heavily tested Windows platform with a set of new user interfaces. 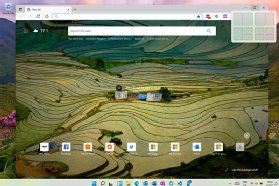 Under the hood, Microsoft brings support for 64-bit Intel apps to its ARM-based devices, while new ARM-programming tools finally deliver an ARM64 version of Office. Windows 11 breathes a breath of fresh air into Windows on ARM, and the Surface Pro X feels snappier with the new OS. Hopefully more ARM devices will be available in the future, as their connectivity and battery life makes them an ideal portable device. Support for Android applications should also help here, with a library of tablet- and mobile-ready apps.

Microsoft’s shift to a continuous integration/continuous delivery development model has allowed it to change the way it builds software, and we’re seeing the benefits of that approach in Windows 11. It may not be the Big Bang of a Windows XP or a Windows 7, but it is a big change from what’s come before and deserves its new number. It will be interesting to see how the previews continue to develop, and how it integrates with Microsoft’s other big 2021 launch, a new version of Windows Server.